His signature ability will be his A2, Rainbow of Woe, which applies Decrease Accuracy and Decrease Resistance in one ability, the only champion in the game able to do so. This should bring down many stat breakpoints in your teams allowing you to build your allies tankier or with more damage. Remember, however, Nari will need accuracy to place these debuffs in the first place so check your numbers! In addition, he brings an AoE Provoke for 1 turn with a Counter-Attack clearly designed to increase the performance of his buff stealing ability on his A1. His unique passive will allow him to transfer 1 random buff from a random enemy to your team. This is RNG so you shouldn’t rely on this but it could be influential in you winning or losing fights in certain scenarios.

He appears on paper to be a strong carry for Doom Tower where Acc/Res numbers are high and may have some potential uses in other areas such as Hydra and Arena.

Attacks 1 enemy. Has a 50% chance of stealing 1 random buff from the target.

Attacks all enemies. Has a 75% chance of placing a [Provoke] debuff for 1 turn. Also places a [Counterattack] Buff on this champion for 2 turns.

At the start of this champion’s turn, transfer 1 random buff from a random enemy to a random ally. This champion’s ACC is increased by 5 for each buff on each ally.

Is Nari the Lucky worth going for?

We would always recommend going for each and every Fusion, if you’re able to – Nari is no different here, AOE control is something that is always helpful in this game, as well as having the rare ability to reduce enemies’ Resistance with the recently added debuff [Decrease Resistance].

As this is a Fragment Fusion, there are 115 available fragments WITHOUT winning any tournaments, so pick and choose what events suit you best as you can skip up to 15 fragments and still achieve the fusion! 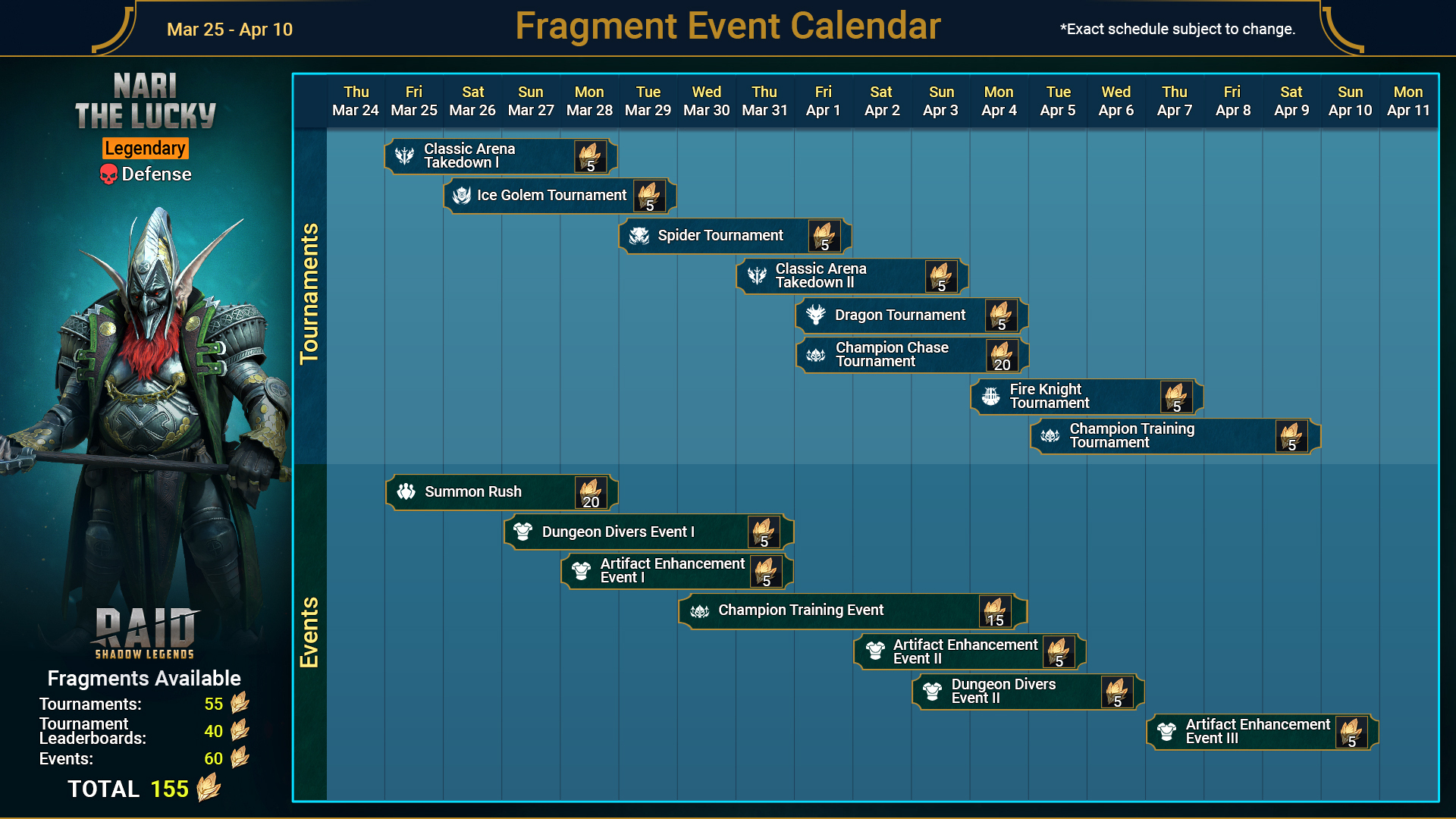 Starting off for the Fusion, we have a huge Summon Event for some of Raids most notorious nukers! To complete this event you’re looking at a total of 7 Sacred Shards, or a mixture of other Shards – the point requirement may seem high but it is rather standard for events like this.

As for the Arena Tournament, as always it is quite a passive one, you should be ensuring to use all of your daily battles which should allow you to receive the points for this rare fairly easily, of course, if you’re struggling in the Arena this may prove to be a bit of a challenge, but make sure you are persistent in refreshing your fight page every 15min and taking on fights you know you can win – don’t take unnecessary risks.

Much like previous dungeon tournaments in recent Fusions, the point requirement is on the higher end. To earn your Fragments from the Ice Golem Tournament, 2250 points will take around 140 runs of level 20+ based on the worst possible drop rates of only 5* Rare gear.

As always, this may be significantly less based on your luck.