More news! This is absolutely crazy, Plarium are throwing out constant news right now which is an amazing sign! We’ve just received information about the upcoming Fragment Event starting on March 25th!

Nari the Lucky is a strong control Champion with 100% AOE Provoke and Counterattack along with AOE Decrease ACC and Decrease RES debuffs, which will come in handy on Arena, Doom Tower, and when fighting HYDRA. Nari has a very high chance of stealing buff from the target with his A1. And that might have quite a nice combo with his A3 counterattack. And the Passive skill helps him to boost his ACC for each buff on each ally. And allows him to transfer a random buff from a random enemy to a random ally at the start of his every turn which is kinda cool.

Wee Filcher
Attacks 1 enemy. Has a 50% chance of stealing 1 random buff from the target.

Irresistible Wealth – 6 Turn Cooldown
Attacks all enemies. Has a 75% chance of placing a [Provoke] debuff for 1 turn. Also places a [Counterattack] buff on his Champion for 2 turns.

Joyful Song [P]
At the start of this Champion’s turn, transfers 1 random buff from a random enemy to a random ally.
This Champion’s ACC is increased by 5 for each buff on each ally. 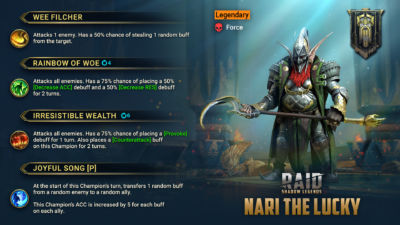