Grythion, the Celestial Griffin appears in Rotation 2 and 3 in the Doom Tower. This challenging encounter will force you to build a team specifically designed to counter her mechanics. Let’s break it down.

Rock Smash – 3 Turn Cooldown
Transfers all debuffs from Grythion to each enemy, then attacks all enemies. Fills Grythion’s Turn Meter by 5% for each debuff transferred.

Death Gust – 3 Turn Cooldown
Removes all buffs from all enemies, then attacks all enemies. The buff removal cannot be resisted. Damage increases by 10% for each buff removed.

Divine Strike [Passive] Attacks an enemy whenever their HP drops below 50%. This attack places a 100% [Heal Reduction] debuff for 2 turns.

Will ignore [Shield], [Block Damage], and [Unkillable] buffs when Grythion has 10 or more [Sky Bond] buffs.

Fair Wind [Passive] Whenever [Grythion]’s Turn Meter is decreased, the Turn Meters of all enemies will be decreased by the same amount.

Places a [Stun] debuff for 1 turn on enemies with fully depleted Turn Meters. Whenever an enemy’s Turn Meter is filled, Grythion’s Turn Meter will be filled by the same amount. Turn Meter increases are tracked and counted individually for each enemy.

Almighty Strength [Passive] Damage from skills that scale based on enemy MAX HP cannot exceed 10% of the Boss’ MAX HP when attacking the Boss.

Almighty Persistence [Passive] All Turn Meter reduction effects are decreased by 50% when used against the boss.

How to beat the boss!

Grythion is the ultimate Enrage boss in Doom Tower. His Sky Bond Passives will cause his damage output to become far too much to manage once he reaches stacks above 10. Therefore, you need to manage how he gains these stacks. He will gain a stack each turn he takes and also when any member of your team drops below 50% HP.  Your team should be tanky enough to ensure you never drop below this threshold otherwise it significantly speeds up his enrage timer. Additionally, anytime you do get hit below 50%, you will also get hit again and with a Heal Reduction debuff making it harder to lift that champions HP back up to full.

Maintaining Decrease Attack on the boss at all times will be extremely valuable in mitigating the risk of dropping below 50% HP. We highly recommend you bring an A1 Decrease Attack champion to increase uptime of the debuff. The boss will transfer debuffs back to your team when he activates his Rock Smash ability meaning long cooldowns for Decrease Attack are not recommended.

Bringing shields and other bonus HP effects to help mitigate incoming damage is also a good approach to take. You’ll want to be careful with the Buffs and Debuffs you bring to this encounter. More buffs = more damage when Grythion activates his Death Gust ability and you dont want to be receiving back substantial debuffs unless you can plan to cleanse these. Alternatively, consider bringing a Block Debuffs ability and time this to be placed before he transfer the debuffs back to you.

To take down Grythion, we recommend you consider a combination of HP Burn and Warmaster or Giant Slayer Masteries as you will struggle to fit any champion who isn’t built reasonably tanky.

Beating Grythion can be done in a few ways and we have 2 examples of team compositions below! First, let’s cover the minimum stats you should aim to hit.

For a full stat breakdown, use our handy Raid Stages Tool which displays enemy stats for every encounter in the game. If you are not already a member of the HellHades community, you can sign up for a Free Account to gain access to this tool. Below we will outline the minimum stats you should aim for:

The key stats you should consider are Accuracy and Speed on your team alongside good HP/Def to survive the damage. Depending on the strategy you’re going for – you may need to push high offensive stats too. If you have a particular champion that you do not want to be debuffed, Resistance can be used to stop the debuffs being placed on your champion. You cannot resist the buffs from being taken by Grythion.

You will face Grythion on Floor 10, 50, 90 Normal and it is Spirit Affinity. To be successful aim for:

You will face Grythion on Floors 10, 50, 90 Hard and is Spirit Affinity. To be successful aim for:

You will face Grythion on Floors 30, 70, 110 Normal and is Magic Affinity. To be successful aim for:

You will face Grythion on Floors 30, 70, 110 Hard and is Magic Affinity. To be successful aim for:

Depending on which strategy you choose, you should ensure you have enough HP and Defence to survive this encounter. Generally, we advise at least 50k HP and 3500 Defence for Normal. 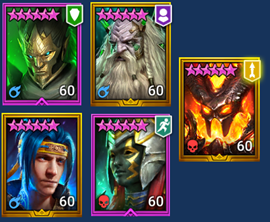 The key concept of this strategy is to use HP Burn and Warmaster to safely defeat the boss whilst keeping your team topped up on HP. The recent addition of Ninja to the game has made this strategy significantly faster even if you build Ninja reasonably tanky. That is because he will activate the HP burn on his A2 causing significant damage to the boss. Underpriest Brogni is also powerful because his shield cannot be removed which should reduce the risk of dropping below 50% HP.

Your source of healing comes from passive effects such as Scyl of the Drakes and Doompriest. You can bring other forms of healing but be careful they do not bring any negative effects that Grythion can take advantage of.

Drexthar Bloodtwin: Drexthar is once again amazing on this boss, as he can keep a very high uptime on HP burn alongside his innate defensive capabilities.

Doompriest: Her passive 10% heal will help keep your team HP up alongside clearing any stuns/debuffs you pick up along the way.

Underpriest Brogni: Whilst his shields will not be effective beyond stack 10, his passive ability to heal and reflect damage under shields alongside the shield being immune to the buff removal ability are absolutely amazing for this fight.

Not every player will have this exact team, but there are very good options to some of these champions. Below we detail viable alternatives:
Tayrel: Altan, Coffin Smasher, Giscard the Sigiled, Lodric Falconheart, Peydma
Drexthar Bloodtwin: Can be replaced with a Support from the list below or another HP Burn Champion of equal tankines i.e. Akoth.
Doompriest/Brogni: Tuhanark, Scyl of the Drakes, Cardiel, Lugan the Steadfast, Vogoth 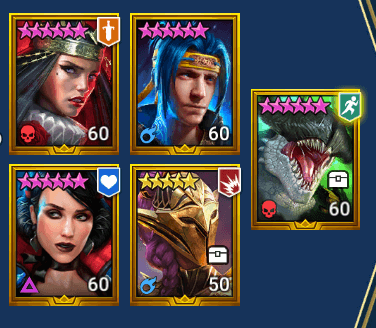 The idea of this team is simply to nuke the boss as fast as physically possible by abusing Ninja’s A2. You will bring a team that can clear the 2 previous floor quickly and then rely on the duo of Ninja and Elenaril to burst through the boss. Elenaril is used here to ensure HP Burn remains on the boss as her A1 cannot be resisted.

To be successful you should aim for around 60k+ HP, 3k+ Defence and around 300+ Resistance on both your Ninja and Elenaril. This will be fast but not 100% but it does present as a much faster way to beat this boss if you can find the gear.

Ninja: As you can see from other strategies, Ninja’s A2 is an absolute monster for fighting bosses in Doom Tower. It will burn Grythion to dust before he can take him down.

Venus/Abbess/Fu-Shan: This 3 man setup can be replaced with any 3 man team capable of clearing the 2 enemy hero waves prior to the boss. This normally is a powerful AoE nuker alongside a decrease Defence champion.

Ninja: Unfortunately currently there is no one that can replace Ninja for this role. Good thing we all got him for free during the promotional period. If you missed out on this – consider strategy 1!

Strategy 3: The Power of Friends! 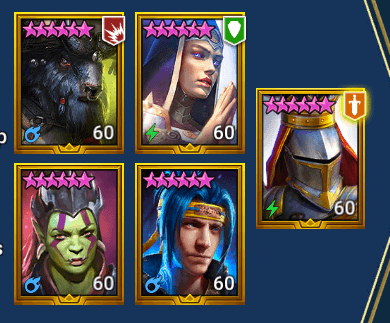 Similar to strategy 2, This team utilises Ally Attack to nuke Grythion as fast as possible. Ideally you want 2 Ally Attack champions with an A1 decrease defence as high up the team order as possible. This team will not be reliable but it can get you through early floors alongside completing the encounter in the fastest number of turns.

Septimus: One of the hardest hitting champions in the game, he will deal significant damage to the boss.

Ally Attack Champions: Essential to this team, Ally Attack will allow you to nuke Grythion before he can hit 10 stacks.

Farming Grythion rewards forge materials to make the Guardian set. You can read about all the artifact sets you can earn from Doom Tower in our Doom Tower Artifacts Guide.

If you want to Farm Grythion, we recommend using Strategy 2. This represents the most reliable farm utilising the least of your champion pool and can be done on auto making this team an ideal farming option.